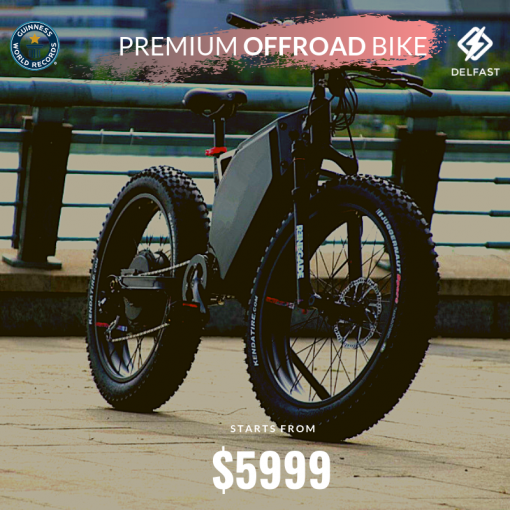 Here at Delfast, we always take into account the wishes of our customers when we work on upgrading existing and creating new models. 70% of our customers live in the United States, and it was at their request that we had created our previous model, Top 2.0 (https://delfastbikes.com/top-2-0/), more powerful than the previous Top 1. TOP 2.0 (https://delfastbikes.com/top-2-0/) is an electric bike that allows you to travel far and not especially choose the road. But it, like any MTB bike, has its limitations. Moreover, a heavy and powerful electric bike is nevertheless closer to light enduro than to classic MTV. But even this did not become the main reason that pushed us to develop a new model.

The main factor that pushed us to create an offroad bike was that our customers from the USA are located in almost all climatic and geographical areas. Delfast bikes drive through mountains, beaches, snowy plains, forests, deserts and so on. And, since we have customers in more than half of the US states, we simply had to release a model whose main habitat would be territories outside large cities and which would not stand idle in your garage for long and snowy winters. After a series of studies, the choice fell on the design of a bicycle with low-pressure tires. These bikes are commonly called fat bikes or snow bikes and these are uncompromising SUVs. Their main feature is that they do well without roads at all and feel great on ice and on snow. Those. riding such a bike in the middle of a frozen lake for winter fishing is an absolutely trivial task. They feel just as good in the sand. On it you can, having attached a surfboard to it, drive to a distant beach, where you can’t really get on foot and cannot be reached by car. We already wrote about this in a previous article about fat bikes as a class.

In general, a rather complicated decision was made. We just need to connect a bike with a heavy electric bike with a huge mileage and the problem is solved. But in fact, this turned out to be not an easy task, after all, the capacities that the Top 2.0 (https://delfastbikes.com/top-2-0/) platform develops and on which we decided to build our Delfast Offroad (https://delfastbikes.com/offroad/) are ten times higher than the capacities that even the most high-class athlete can develop, which means that they increase by several times and the loads the bike is experiencing. 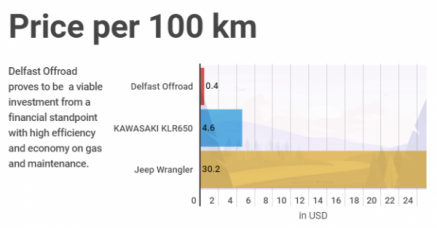 If we add uncompromising off-road traffic to the task, we get a task comparable to designing a light off-road electric vehicle from scratch. It was necessary to decide whether the suspension is needed, what kind of load the tires and structural elements experience when driving on the road. It was necessary to find a reasonable compromise in order to make our bike as versatile as possible. 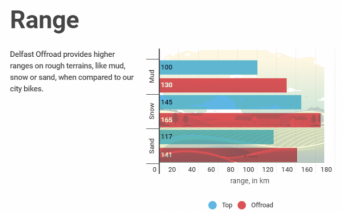 For example, in the pre-production sample of our bike, we used the popular and very high-quality Rockshocx Bulto front fork, but as it turned out, this fork does not give any practical advantage over using our own rubber. In practice, it works as an additional shock-absorbing element at especially high loads, and in standard situations the rubber itself absorbs. That is why we settled on rubber with a metal court, which withstands loads significantly greater than standard bicycle rubber. 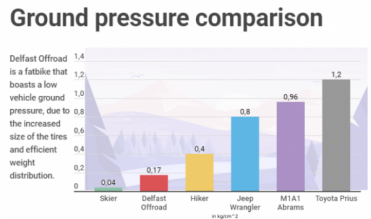 So in the process of working and finding the best off-road solution, our speed and overall range decreased compared to Top 2.0., But the versatility, “all-weather” and cross-country ability on loose soils and snow increased significantly. In addition to cross-country ability, our model, as well as all fatbikes, boasts a greater carrying capacity. We tried to display all this on the chart below.