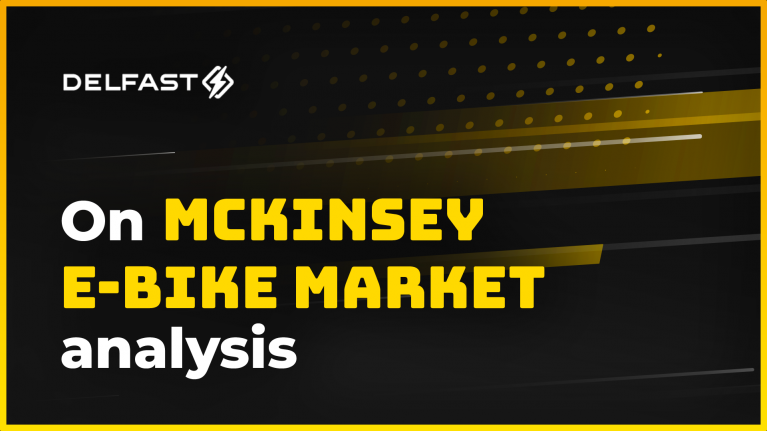 McKinsey released an analysis of the e-bike market.

They write: “Improbable as it may seem, e-bikes could finally be having their day.,” “The sector has momentum,”; the most curious quote is “The market for two-wheel EVs (E2Ws) and three-wheel EVs (E3Ws) was valued at around $97 billion, or 4 percent of global auto sales."

Why are these numbers important?

Prior to early 2020, there was one estimate of the size of the e-bike market: “Electric bike worldwide report” estimated the global e-bike sales in 2016 at $16 billion, with a forecast to grow to $25 billion by 2025. Now, McKinsey is reporting the annual sales of $97 billion, which is 6 times more. In other words, the e-bikes sales have grown 6 times in 4 years.

In addition, McKinsey analysts predict that the e-bike sales will nearly double over the next two years: "The market could reach $150 billion by 2022." This means boom.

What is the reason for the growth?

McKinsey writes, “several trends have converged to bring e-bikes out of obscurity,” “governments crack down on emissions,” “innovators have introduced new technologies and business models,” “since COVID-19 began to spread, [partly because] people are avoiding subways and other shared- mobility solutions.”

Can I trust those conclusions?

After the outbreak of the pandemic, most of the e-bike manufacturers and distributors we communicate with in the US, EU and China have experienced the sales growth from 50% to 500%. Dutch e-bike producer VanMoof reported link the 10x growth in 24 months (and 220% during the pandemic). At Delfast bikes, we also tracked more than 10x growth over the same period.

On the other hand, the bike-sharing business model is experiencing serious difficulties not only during the pandemic, but in recent years as well. For example, Jump, the Uber bike share, is bankrupt. Uber acquired Jump in 2018 for $ 200 million, and this year Jump's loss was $ 60 million per quarter link.The company was transferred to the management of Lime (scooter-sharing), and then about 30 000 electric bikes were thrown into a landfill. The service closed in May 2020. Another, once the largest bike-sharing company, Ofo that owns 15 million yellow bicycles worldwide, filed for bankruptcy in December 2018 and dumped all bikes in a landfill. Therefore, Delfast observations do completely coincide with the conclusions of McKinsey analysts.

The growth of the industry is confirmed by the fact that large players and venture investments have come here. Previously mentioned VanMoof company closed the $40 million round in September (they raised $73 million in total). This July, the Belgian Cowboy raised €23 million, and in February Seattle-based Rad Power received a $25 million investment.

McKinsey analysts provide several other reasons for the growth of the two- and three-wheel electric vehicle industry in the report. First, it’s a decrease in the battery cost, along with a forecast of a further decrease from $220-280 per 1 kilowatt-hour to $90-130 per kilowatt-hour. This will make e-bikes cheaper and more affordable as long as the battery usually takes about 40% of the cost.

Second, in recent years, the requirements for emissions have tightened. Regulators increase the requirements and reduce the vehicle emissions. Many governments are opting for electric vehicles because they can reduce their carbon footprint by 65-70%. For example, the Chinese government  completely banned the sale of gasoline mopeds in 2011.

McKinsey's findings are fully justified. Thus, for example, this September Boris Johnson announced that the UK would ban the sale of vehicles with internal combustion engines (ICE) not in 2040 as was planned, but 10 years earlier, in 2030. Germany, Ireland and the Netherlands will also ban new ICE vehicles in 2030. In Norway, sales of new petrol and diesel vehicles will stop before anyone else in Europe, in 2025.

Analysts from other sources also confirm McKinsey's findings regarding the positive impact that e-bikes have on emissions. The Wall Street Journal writes: "Electric two- and three-wheelers on the roads avoided more pollutants than all electric cars combined in 2018." link 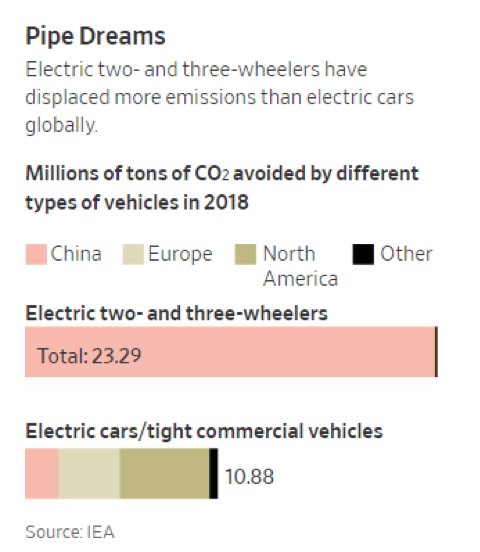 What are the conclusions in the report and to what extent are they applicable in Ukraine?

Analysts predict the development of the electric transport market in several directions. Despite the fact that there are no definite conclusions about where the market will go, they suggest considering the following options:

- an establishment of modular open platforms for OEM manufacturers that will allow selling e-bikes in the B2C segment, for sharing e-bikes and for transporting passengers ("electric rickshaws") 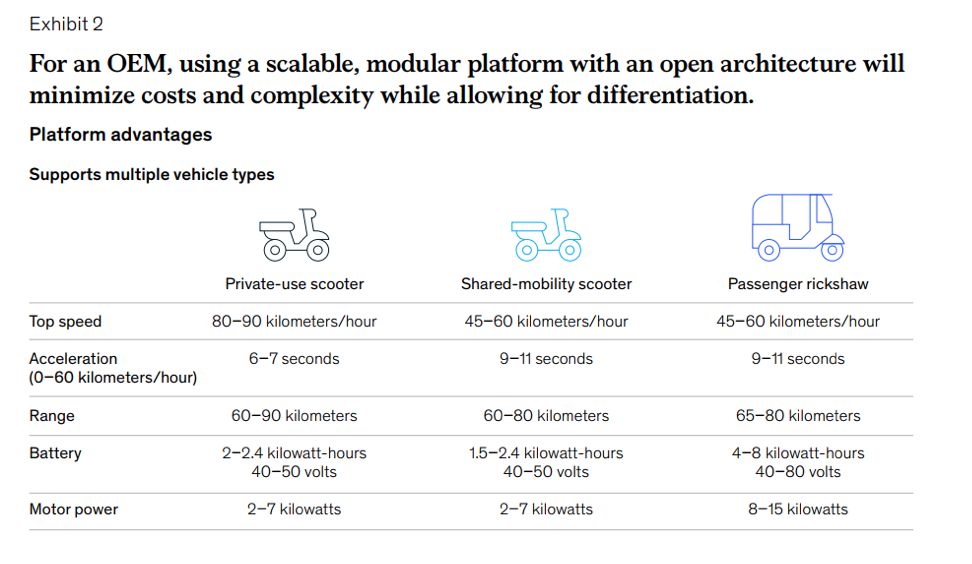 - a development of new business models, including leasing and credit, the use of solutions for the last mile. Also, e-bike sharing is not written off, but it is necessary to rethink and refine the business model.

- a creation of the added value for other players in the industry. For example, the development of electronic components, or the replacement of internal combustion engines with electric motors.

- new strategic partnerships and infrastructure development. Particular attention is paid to the battery-as-a-service (BaaS) business model - battery as a service. Users will be able to quickly replace the batteries on their e-bikes, and the business will profit from providing such service (this is the model used in the Taiwan project Gogoro). 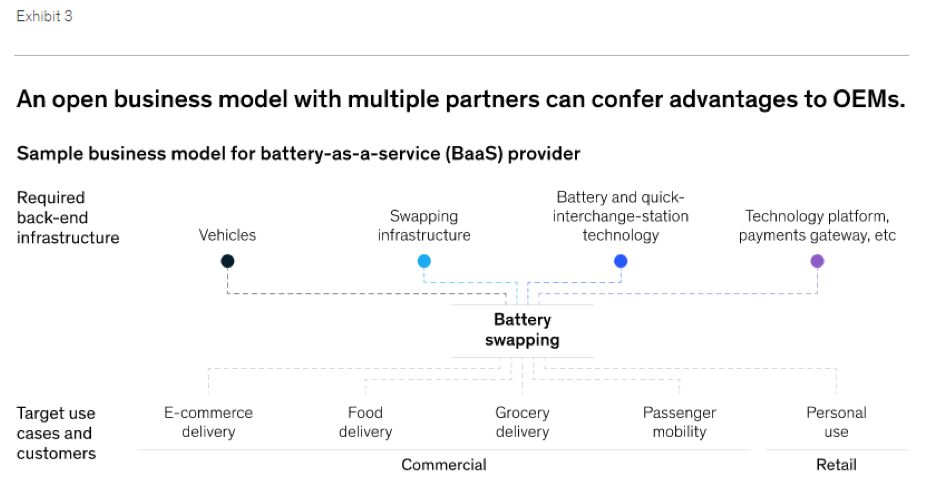 Speaking of Ukraine, the country is still at the initial stage of market development. There are several companies in the country that make e-bicycles, but there is no developed mass market. For instance, Delfast colleagues accelerated an electric motorcycle to 201 km / h on the runway of the Antonov airport. However,  but this is a piece, unique product:

There is no mass production of electric bikes in Ukraine. Besides, today there is neither supply, nor demand for innovative business models in the field of electric bikes. For example, the battery-as-a-service business model is not ready to be launched in Ukraine, since there are relatively few electric bicycles on the roads. At the same time, the batteries on them are different, incompatible with each other; there is no single standard.

On the other hand, new hypotheses need to be run and tested, but at the same time, the one should not rely on the Ukrainian market alone. Having a development in Ukraine, a product can be created and sold around the world. The global e-mobility market is growing at a high rate and it will be one of the hottest directions in the coming decade. The McKinsey report confirms this.