How to make your e-bike go faster 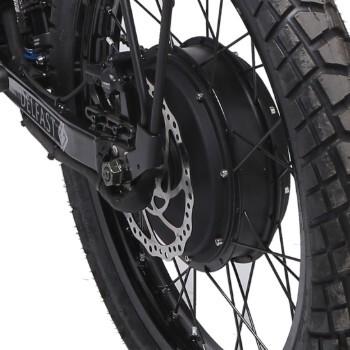 In recent years, the world has witnessed the booming demand for electric bikes. People switch to the electric vehicles as they are more convenient, emissions-free, affordable and silently operating. The coronavirus pandemic has also strengthened this trend, as people started looking for new ways to move through the city and stay healthy during the lockdown.
Modern e-bikes offer a variety of models with different speed, power, range and price for riders to choose from.
But how fast can e-bikes go?

Are there any legal restrictions?

Before starting to ride an e-bike, it is important to get to know the appropriate laws and regulations in your country. For example, in the United States the rules for e-bikes on public roads vary from state to state and allow from 20 to 30 mph e-bike speed, so riders need to follow the local traffic rules in a place they live.
In the most states, the US regulations list the three classes of electric bikes:
·   Class 1 e-bikes with pedal-assist only up to 20 mph (32 km/h),
·   Class 2 e-bikes with throttle control up to 20 mph (32 km/h),
·   Class 3 e-bikes with pedal-assist up to 28 mph (45 km/h).
All three classes may include motors up to 750W of power.
The electric bikes that meet these requirements are not considered as motor vehicles, although they do have a motor.
Nevertheless, more than half of the US states don’t have a definition of what electric bikes are allowed and not allowed to do, or what they can and can’t contain.
To be on the safe side, a majority of e-bike manufacturers tend to produce e-bikes with a maximum speed up to 20 mph.But generally, when purchasing an electric bike that can ride faster than 20 mph, a customer technically buys a motor vehicle.

Do I need a license?

If you exceed the allowed speed of 20 mph using a motor alone, you’ll have to apply for a moped license. This includes having a license, a registration for the vehicle, and most likely a state decal that should be placed on the back of your e-bike. With the latter, police officers make sure your vehicle is street legal.  If you have an electric bike with a speed over 20 mph and don’t plan to use it on the roads, it will be categorized as the off-road only vehicle, meaning it isn’t street legal and can’t be used on public property. You can still ride it within your own property without any sanctions from the state.

You can ride an electric bike if you’re 12 or over, as long as it meets certain requirements. This implies for the e-bikes with the maximum speed of 20 mph and a motor with a power up to 500 W. If an electric bike is considered equally good as a motorcycle, it will fall under the appropriate regulations.

Different e-bike producers can offer you a vast number of speed range, battery capacity and motor power. Delfast produces one of the fastest and most powerful e-bikes model in the world, such as TOP 3.0 with the maximum speed of 50 mph, which is a perfect choice for the trips out of town. Delfast electric bike easily handles hilly or mountainous terrain and can withstand any weather conditions. Some manufacturers can place inhibitors on motors to limit their maximum speed to obey the law. However, there are a few tricks that will allow to remove them and derestrict your electric bike.

A few ways to speed up your electric bike

1. Don’t take heavy luggage on your trip. Travel as light as possible. A small first-aid kit and repair set are must-haves on board, but don’t overload your vehicle with extra things.
2. Avoid standing up. You may feel pure pleasure and fun on a regular bike, but standing up lowers your speed on an electric bike. So remain seated while using the full throttle on your e-bike.
3. Check the tire pressure regularly. Electric bikes are heavy enough which causes more stress on the tires. That’s why it’s important to check the air in your tires at least once a week.
4. Don’t throttle at half battery charge. This will not damage your bike, but can lower your speed.
5. Replace the tires regularly. As a rule, smoother e-bike tires for higher speed tend to wear down twice faster than standard ones.
However, there is one more way to remove all the restrictions on your electric bike.

Note that this measure, also called e-tuning, can cause the warranty voiding, as the manufacturer can consider that as tampering.
By derestricting you e-bike, you make it reach its maximum speed, but not increase in power.

As we mentioned previously, Delfast has one of the fastest and more powerful e-bike models in the world. This is Delfast TOP 3.0 with the 5,000W peak-rated hub motor allowing to reach 50 mph. The 72V and 48Ah battery gives the bike 3.5 kWh of capacity, which is enough to ride 200 miles on a single charge.
The new TOP 3.0 engine has the power to accelerate up to 5000 W* and can reach maximum speed much faster than any previous model.
In October Delfast announced taking the single-model strategy, which implies the focus on the development of an excellent TOP model that will not have an alternative on the market.Thus, the company said goodbye to its legend, Delfast Prime model that holds the World Guiness Record as the e-bike with the longest range ever – 230 mi or 370 km on a single charge.
The company also launched a big sale with up to $900 discount on its previous models that will be discontinued. The sale finishes on 15 November, so hurry up to order one!