Why Did Electric Bikes Become Popular in the USA? 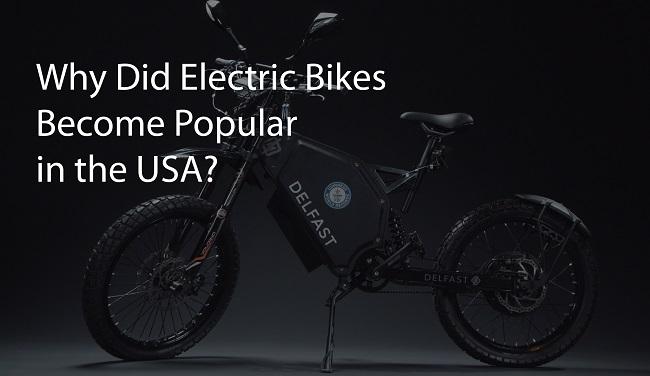 Electric bicycles are now quite popular in the United States. This popularity rose in the last few years. This type of vehicle was invented in Japan almost 40 years ago. For many years, electric bikes (also e-bikes) remained unknown outside Japan. But approximately 20 years ago, they began to be popular in Europe. In the last years, it is not uncommon to see people riding these vehicles on designated cycle lanes and countryside trails of America.

But why did electric bicycles become so popular in the USA? A general answer is because they cater to all types of people. Cycling has been long a preferred commuting method for many people in the United States. It is cost-effective, environmentally friendly, and good for one’s health. Thus, the electric bike comes as an enhancement for commuting.

What’s more, the pedal assistance provided by the motor of an ebike allows for more people to enjoy the benefits of cycling. You don’t need to be very fit to ride long distances using an electric bicycle. Difficult terrain such as steep climbs is less challenging with this type of vehicle.

So, we can summarize the reasons for the popularity of e-bikes in America as follows:

Let’s discuss with more detail these reasons to understand why more and more Americans are going electric in the world of cycling.

A Bicycle with a Motor, It Should Be Expensive…Well, Not Really

While electric bicycles are more expensive than their traditional counterparts, they are still a cost-effective mode of transport. To get an electric bike, you likely have to pay several thousand dollars. The battery, electric motor, and control system represent additional costs.

However, if you opt for an electric bike, the real economic benefit comes in the long run. It is not uncommon to hear people say that an e-bike costs what a used car would. It is true. But running an electric bicycle is much cheaper. First, you don’t have to pay for fuel. Gas prices are high and always increasing. You will spend a small fraction of gas money if you go electric.

One may argue that you still need to recharge the battery and it won’t be for free. That’s right. However, let’s make a basic comparison. On average, an American citizen covers 13,500 miles a year driving a car. Let’s estimate how much it would cost you to recharge the battery of the Delfast Top 3.0 e-bike to cover the same distance. Considering that the average cost of the kW/ hour in the United States is $0.12, the total yearly price would be just $24. Now, calculate how much you spend on fuel per year and draw your conclusions.

Batteries also deteriorate over time and, sooner or later, you have to replace the battery of your electric bicycle, right? Isn’t this a significant cost to consider? Yes, but let’s elaborate. Arguably, the battery is the most expensive component of an electric bike. The most commonly used batteries for e-bikes are of the Lithium-ion type. The best batteries for this application can cost over $1,000.

However, an important thing to consider is the lifespan of the battery and the efficiency of the electric motor. In these two aspects, the Delfast Top 3.0 is a winner. The battery of this e-bike can be recharged up to 3,000 times. This is three times more than the best batteries used in other electric bikes. What’s more, its 72 V electric motor is highly efficient, which guarantees that energy is not drawn from the battery unnecessarily.

Clearly, cost-effectiveness has attracted many people to the realm of electric bicycles. In this regard, the most cost-effective e-bikes like the Top 3.0 have become the most popular in America.

Today more than ever, people are concerned with the undeniable effects of global warming and the resultant climate change. Therefore, going “green” to cut CO2 emissions has become a global trend in the last years. Several European countries have set the year 2030 as the deadline to stop the use of gasoline engines for transport. In such scenarios, electric vehicles, including e-bikes, have the potential to make a real change.

In the United States, different actions to reverse global warming are also gaining momentum. More and more Americans are favoring electric cars and bicycles for commuting. Yet, an electric bike is more affordable than an electric car. For many Americans, the choice is obvious. They prefer to invest in an electric bike and thereby contribute to curtailing the emission of harmful greenhouse gases into the atmosphere.

A Healthy Lifestyle Is In Vogue

Electric bikes are good for your health. There is a misconception that the assistance provided by the motor removes the effort of riding an e-bike. Nothing could be further from the truth. Cyclists can choose the level of assistance they get from their electric bikes. For instance, the Delfast Top 3.0 offers several power modes including a basic pedal-assist mode. Thus, in the latter, the motor will help the cyclist during challenging terrain only.

More Americans are adopting healthy lifestyles. It is a new trend somehow. They mind their diets and try to exercise more. Instead of driving a car, more Americans prefer to commute using an e-bike. The Top 3.0 has become the favorite vehicle of thousands of Americans that want a healthier mode of transport. Thanks to its long-range and reliability, this two-wheeler is extremely popular along designated cycle lanes and off-road trails in the United States.

Cycling Is Now Available for Everyone

Electric bikes make cycling accessible to everyone. This is one of the biggest reasons for the tremendous popularity of these vehicles in America. As mentioned, the most popular e-bike in the United States, the Top 3.0, offers different power modes to support the cyclist. Hence, people that could not pedal a conventional bike because of a medical condition now can enjoy cycling. They can choose the most convenient power mode and hit the trail immediately. Likewise, the elderly can continue enjoying cycling without the risk of injury.

Technological innovation is so fashionable. We all strive to have the most advanced smartphone or computer. The word “smart” gives a sense of sophistication to all things: a smart watch, a smart TV, and more. Electric bicycles are much more than a bike with an electric motor. They are smart bicycles. For example, the Delfast Top 3.0 is equipped with a very sophisticated electronic control system that makes very efficient use of available energy.

Moreover, the sensors on the e-bike can be integrated with mobile apps to collect a lot of information about your trip and physical performance. This sophistication makes electric bicycles quite fashionable and objects of desire.